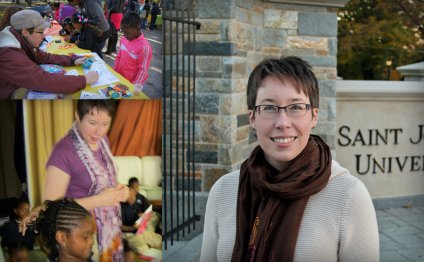 American Authors will perform at Capital Fest on Saturday, Oct. 3, at 7 p.m. on the lawn of The Catholic University of America’s Columbus School of Law.

Capital Fest is a fall concert hosted by Program Board, a student-run event planning organization for CUA. Last year’s Capital Fest, featuring the band Walk the Moon, was the first concert held at CUA since 2006, as well as the biggest planned event for undergraduate students at CUA to date. As a result of last year’s success, Program Board is expecting an even larger turnout this year.

Following last year’s tradition, the headliner was announced to students earlier this month at Fall Fiesta, another Program Board event. American Authors is a well-known American alternative rock and country band from Brooklyn, N.Y.

Amanda Cristi, a junior and the social media chair for Program Board, explains how the band is chosen and booked. “First, we send out a survey to the students and have everyone rate their preferences on music genres. The number one pick was alternative rock, so we compiled a list of bands that fit the genre and our budget, and then worked with our booking agent in Atlanta. Getting American Authors was a pretty big deal.”

They are best known for their singles, “Best Day of My Life” and “Believer” from their album Oh What a Life. “American Authors right off the bat is even better known than last year’s band and they are awesome performing live, so it should be really fun, ” says Cristi.

Capital Fest T-shirts and food will be sold to students during the concert. “This year we are bringing in food trucks — I think it will bring in a lot of people, since food trucks are really trendy right now. I think the students will love it, ” Cristi says.

She says Program Band aims to make Capital Fest an annual event at Catholic University. “Capital Fest has already become a staple event with last year being such a hit. It has allowed this year’s budget to be even bigger, which gives us more options to create a really fun event for the students, ” she notes.

Capital Fest is free for all undergraduates with the option of one outside guest per student, at the cost of $10. Students can pay $10 for a VIP ticket, which includes early admission, a reserved area in front of the stage, and an event T-shirt. VIP tickets are sold online and in the Edward J. University Pryzbyla Center. Registration and event information can be found at