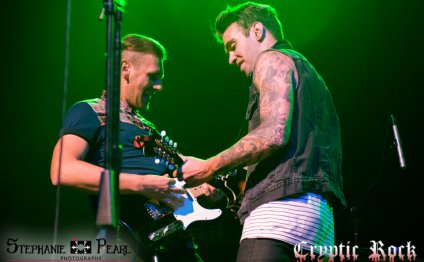 This evening, Brooklyn-based American Authors played at the PNC Bank Arts Center in Holmdel, New Jersey, an hour outside of New York. It was the second-to-last show on the Native Summer Tour with OneRepublic and The Script. But although this tour is coming to an end, American Authors won't be slowing down- after the final show in Virginia Beach, they'll head right over to Europe for a series of festival performances.

After their set was over, AXS caught up with lead singer Zac Barnett for an interview, where they talked touring, their "Believer" music video contest, and more!

AXS: For the record, can you state your name, your role in American Authors, and a random fact about yourself?

Zac Barnett: My name is Zac Barnett and I sing for the band American Authors from Brooklyn, New York. A random fact about me is my father was a puppeteer and magician.

AXS: That's really cool - did you ever explore that yourself?

Zac: No, although I did go to all of his shows and spend my summers with him. I used to be really shy as a kid so I didn't like it. For awhile I wanted to get in to puppet-making, like Jim Henson-style. He was the one who taught me how to play guitar.

AXS: You're on the tail end of your tour with OneRepublic and The Script; how has the tour gone?

Zac: It's been great! We just finished our second to last show with them tonight. We have a show not tomorrow but the next day in Virginia Beach and then we'll take off to Europe. It's really been amazing- one of the best experiences of our lives.

AXS: You've been busy - after Europe, you'll be back in the US in the fall.

Zac: We're headlining the Honda Civic Tour in the fall with The Mowgli's, Echosmith, and Oh Honey. That's gonna go through October and November.

AXS: You'll be gone for a pretty long time - when you're out on the road for such a long time, what do you do or bring with you to remind you of home?

Zac: It's not terribly difficult nowadays with technology - calling and texting and Skyping with friends and family back home. Other than that, I don't think there's one specific thing. Here's the thing about me - I pack so light, I try to fit two months worth of clothes into a single backpack.

AXS: Have you ever been on a tour and realized that you had packed too light, and forgotten something important?

Zac: Yes, definitely - I just learned that on this past leg. Fortunately we have a day off in New York tomorrow so I'm going to go back to my apartment and re-pack a bigger bag to bring out for Europe and everything.

AXS: Yesterday you announced the contest for the "Believer" dog video, where fans can submit a photo of their dog and talk about why adopting a dog makes their life better. What inspired you to do this contest?

Zac: Really, [we were] just trying to have fun with the fans and interact with them! We wanted to do something where it's not just our music video but it can be everyone's video, and just get as many people involved with it as possible. For the lyric video for "Best Day Of My Life" we worked with the Georgia English Bull Dog Rescue and worked on getting a dog adopted, which we did.

AXS: That's awesome! Do you have any dogs or other pets at home?

Zac: Right now I don't, but I grew up with dogs.

AXS: So you're a dog-lover?

Zac: I am definitely a dog person.

AXS: You released your debut album Oh, What a Life back in March. A lot of the album deals with finding a positive outlook through the struggle of being a musician, and then "Best Day Of My Life" became a breakthrough hit. With a song that has such a positive outlook, does it at all take a different or special meaning now that you're at a point that you're seeing some success?

Zac: No, it's really all the same thing. Once we started touring and the album took off and everything really started to turn around for us as far as our musical careers, we started to adopt a whole new set of problems and obstacles to overcome.

We couldn't be happier with where we're at - we're very thankful for everything we have but now we need to think about, "Okay, what's our next single going to be? What about a music video? How do we balance our family and our friends with touring all the time, and finding more time to write more music?" There's always gonna be obstacles.

AXS: When you're on the road for months and months at a time, are you ever just so busy that it's hard to fit in that time to write new music?

Zac: It can be, but we've been able to find good amounts of time. We already have a bunch of new songs that we've been working on and demoing out. Before our show tonight, we laid down some vocals and some scratch tracks to get a new song going. So we still make it work- we still find the time.

AXS: Do you have plans for when you'll record a new album, or is that not solidified yet?

Zac: No set dates or anything, but we're always writing. We have a lot of ideas and a lot of new songs that we're already really excited about. On our headline tour in the fall, we're going to be trying some of these new songs out, so it'll definitely be a really good time.

AXS: The members of American Authors met when you were all students at Berklee College up in Boston; then you moved to Brooklyn in 2010 - why move to New York?

Zac: We all dropped out of school and a bunch of our friends had already moved to Brooklyn. We started traveling back and forth between Boston and New York City about two or three times a week to record, play shows, and just be part of the scene there. We weren't going to school anymore so it was like, "You know what? We might as well just make the move to Brooklyn, where it feels like our band really belongs." We all moved in to a tiny little apartment together and shared that and just worked our asses off, and it eventually paid off!

AXS: What is your favorite venue to play in New York City?

Zac: One of our favorites is Bowery Electric. That was kind of "our" venue that we would always play. When "Believer" and "Best Day" were starting to get some hype that's where we played our showcase, just because that's a venue that we had played so much and were super comfortable with. In the fall we sold out Gramercy Theatre, so that was obviously really special for us.

AXS: Are there any New York venues in particular that you haven't played but that you have your sights set out for?

Zac: We get to play the Best Buy Theater in the fall which will be really cool. And obviously Madison Square Garden- I think that's definitely everyone's dream at some point. I would like to play Roseland, although I hear it's closing down.

AXS: What are some smaller or up-and-coming New York City bands that people should listen to?

Zac: We don't know - we haven't been there in forever! A lot of our friends take the producer/song-writer route. One band that is also from Brooklyn is Oh Honey, who are gonna be coming out with us in the fall.

AXS: You've got a lot of touring going on and you're working on new music already - will you have any downtime this year or are you pretty much just going, going, going?

Zac: Pretty much just going, going, going. We have two weeks off at the end of August into early September. We finish in Europe so a bunch of us are going to stay in Europe and just travel around for a couple weeks. In my two weeks I'm going straight to Portugal for a surfing and yoga retreat.

Believer By American Authors Live At the Hipstamatic House ...

The alt-rock band American Authors will be one of the headliners of the epic New Year s Eve event Chi-Town Rising, which…