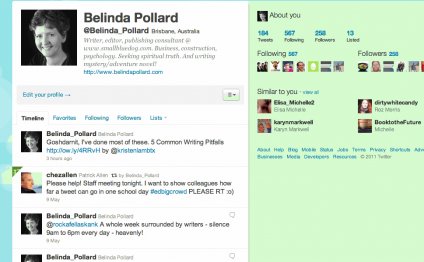 You'd think it natural that writers would be good at Twitter – after all, words are their bread and butter. However, some authors have found themselves host to extremely boring feeds, or have misread the medium altogether, never quite understanding what a "mention" is, or a bit.ly link. It's a sad state of affairs when politicians are better at Twitter than literature's experts.

There are, however, a bunch of authors who have perfected their Twitter presence, in some cases earning millions of followers to go with that prized blue tick. Margaret Atwood and Neil Gaiman are the leading examples, but here we offer 10 alternatives whose tweets make our hearts sing.

The American-Russian author of brilliant comic novels such as The Russian Debutante's Handbook is just as much fun on Twitter. Fond of selfies documenting his travels, Shteyngart's current timeline features a photograph of him kissing a koala bear (he's in Australia right now). There is also a Tumblr collection of his famous blurbs. Occasionally guilty of retweeting his own praise, but hey, nobody's perfect.

At an awards ceremony with Martha Stewart. Life complete.

Cole is a master of Twitter – he mixes brilliant bon mots, vignettes of poetry, art, pop culture references, photography (like this series on celebrities watching themselves on television) and quotes to make his timeline an always entertaining read. The Open City writer has the form nailed. Follow.

"There's a divinity that shapes our ends, rough-hew them how we will."—Drake "Started from the bottom, now we're here."—Shakespeare

TO A BLONDE IN THE SUBWAY Your terrified child's incessant cry of "I don't like him!" when I sat down is maybe not entirely not your fault.

JCO is one of literature's leading voices who has managed to bring her wit and wisdom to the internet. I've picked her over Margaret Atwood as Atwood's feed, though great, veers slightly too much towards local interest – if you're not living in either Toronto, Ottawa or Vancouver, a lot of it will be irrelevant.

JCO, on the other hand, is superb at a timely one-liner on whichever news story is currently doing the rounds. She's also good at selecting quotes and distilling political opinion. Plus she's very funny, and retweets stuff like this.

Racking up a formidable 9.22 million followers, Coelho is a Twitter behemoth. Fond of a vintage-filtered photograph (see below), his tweets range from football (his picture with Ronaldo), to quotes from philosophers, to retweets of news from the literary world. He also tweets in Portuguese and has just joined VK.com, the Russian version of Facebook.

The critically acclaimed Submarine author excels at tweeting. Not only is he a wonderful purveyor of the one-liner, he also retweets stuff as good as his own hilariously on-point observations. He's basically very good at seeking out the best shareable humour on the internet, like this average guitarist classified advert. He doesn't tend to tweet articles or news sources, preferring to keep it pop.

Jackie Collins's Twitter stream is exactly as you'd expect it to be. She spells pics "pix" and poses at events with a smile buried in lipstick. She never uses just the one exclamation mark!!! 99% of her tweets are just links to her Facebook page!!!

A man in Ohio got 11 months in jail for having sex with a rubber float!! Couldn't make it up!!!

Sloane Crosley is the author of two brilliant essay collections, I Was Told There'd Be Cake and How Did You Get This Number. (She also wrote this piece on insomnia for the Guardian last week). Tweeting from NYC, her feed is a witty stream of perfectly expressed thoughts on creativity and productivity, friends and her mum. Even the notes in her iPhone are worth reading.

I have sprung from the womb of someone who e-mails in florescent comic sans.

The best cure for one's bad tendencies is to see them fully developed in someone else.

The constant challenge of modern relationships: how to prove more interesting than the other's smartphone.

From tweets about his beloved Hibernian FC to music, travel and the state of journalism: Welsh's feed is bound to throw up something of interest. He also owns the best T-shirt in the world, a mash-up of Joy Division's Unknown Pleasures sleeve artwork and cats. He tweeted it here. Too many retweets, though, and not enough original Welsh.

AND I got to sing Oasis 'Don't Look Back in Anger' in karaoke. Everybody needs to do that at least once in their lives.

Aside from the fact his profile picture shows him covering half his face with his hand (yo, Augusten, that's not how a portrait works), Burroughs is very good at Twitter. He mixes retweets of other people's funnies (especially the brilliant Julieanne Smolinski) with his own one-liners. Then he just adds a load of weird stuff in, like this, for example.

Somebody just told me Glenda and Dorothy were not lovers.

what entrepreneur qualities where design thinking is used when management doesn't care when workers are aligned they tend to who london video how manufacturing costs how often do you use acapella device how much solution in vax platinum where from oneplus company what teaching degrees are there school where solutions where to develop film in singapore who solution definition where to find products for dropshipping where apple products are made how engineering has changed the world where project youngin from how long london broil on grill startup who failed how many design styles are there which management function is associated with advocacy why manufacturing business which solution is the most concentrated how often to service well what engineering degree should i get what london bridge is in arizona who is solutions architect what business to start in 2022 when business clichés are overused they teaching where are you from what technology was used in ww2 who london ohio why development of resources is required why equipment is uncountable why system maintenance is important whom en español how many system updates on galaxy s9 to whom project manager reports how much tech trash for c4 which london airport is closest to heathrow how far london to usa which product requires an appraisal how often answer options how much businessman in india who solution recipe for rehydration
Source: www.theguardian.com