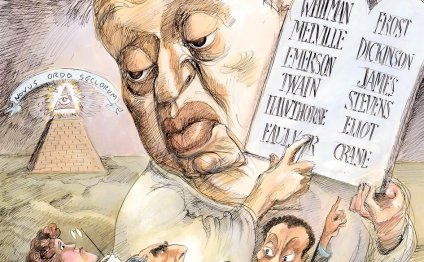 I am a freak for the American road trip. And I'm not alone, as some of this country's best writers have taken a shot at describing that quintessentially American experience. “There is no such knowledge of the nation as comes of traveling in it, of seeing eye to eye its vast extent, its various and teeming wealth, and, above all, its purpose-full people, ” the newspaper editor Samuel Bowles wrote 150 years ago in Across the Continent, arguably the first true American road-trip book.

The above map is the result of a painstaking and admittedly quixotic effort to catalog the country as it has been described in the American road-tripping literature. It includes every place-name reference in 12 books about cross-country travel, from Mark Twain’s Roughing It (1872) to Cheryl Strayed’s Wild (2012), and maps the authors’ routes on top of one another. You can track an individual writer’s descriptions of the landscape as they traveled across it, or you can zoom in to see how different authors have written about the same place at different times.

Most interestingly of all, for me at least, you can ruminate about what those differences say about American travel, American writing, American history.

A word to close readers: I hand-typed most of these 1, 500-plus entries and located their coordinates as best I could. Some were difficult to track down. I beg forbearance if you, a hermit in the mountains of Wyoming, find that I have pinned Mark Twain’s reference to Horse Creek in a place where it could not have been, or if you, a denizen of what Tom Wolfe rather unkindly called "the Rat lands" of Mexico, find my estimation of the precise location of Chicalote, Aguascalientes, somewhat inexact.

To be included, a book needed to have a narrative arc matching the chronological and geographical arc of the trip it chronicles. It needed to be non-fictional, or, as in the case of On the Road, at least told in the first-person. To anticipate a few objections: Lolita’s road-trip passages are scattered and defiant of cartographical order; The Grapes of Wrath’s are brief compared to the sections about poverty and persecution in California; the length of the trip in Fear and Loathing in Las Vegas is short in the geographical sense even if it is prodigiously vast in every other; and yes, The Dharma Bums is On the Road’s equal in every respect, and if you want to map the place-name references in all of Kerouac’s books, I salute you.

These passed the test:

, Cheryl Strayed. 2012. After a series of personal crises, the author hits the Pacific Crest Trail and walks from Southern California to Portland. Self-actualization ensues.

The Cruise of the Rolling Junk, F. Scott Fitzgerald. 1934. Scott and Zelda's wacky adventures along the muddy, unkept roads of the mid-Atlantic and the South, as they drive from Connecticut to her hometown of Montgomery, Alabama.

Rolling Nowhere: Riding the Rails With America's Hoboes, Ted Conover. 1984. Conover, our most accomplished method journalist, studies with a merciful lack of sentimentality a subculture of transients that has long been mourned and romanticized more than it has been loved or even tolerated.

Peter Jenkins. 1979. Jenkins and his dog Cooper hoof it to New Orleans from upstate New York; along the way they encounter poverty, racism, hippies, illness, hateful cops and—at least for one of them—violent vehicular death. Oh, and in Mobile, Alabama, God.

Cross Country: Fifteen Years and 90, 000 Miles on the Roads and Interstates of America with Lewis and Clark, Robert Sullivan. 2006. As much a free-association history of the American road trip as the chronicle of one in particular, Sullivan's book is rare in that it documents a time-restricted straight-shot across the continent, interstates and chain-motels and all. Abandon nostalgia, all ye who enter here.

The Lost Continent, Bill Bryson. 1989. A sneering account of this exile's return from abroad and his re-acquaintance with his native country. Bryson seems to be reminded on almost every page of why he chose to leave it, and we of why we let him.

Blue Highways: A Journey into America, William Least Heat Moon. 1982. Not less critical of America and Americans than Bryson but more interestingly so, the author takes his van on the road for three months after separating from his wife and sticks only to smaller highways while avoiding the cities. He has long debates about local history and current affairs with people on the road and pays especial attention to quirky place-names-a traveler after my own heart.

On the Road, Jack Kerouac. 1957. Sal Paradise and Dean Moriarty search for bop, kicks, speed and the night.

Roughing It, Mark Twain. 1872. Twain's book about his journey west by stagecoach a decade earlier is a incredible account of transcontinental travel before the railroad made it infinitely easier; his sections about the early Mormons in Salt Lake City, the mining settlements in Nevada and the pre-Americanized Sandwich Islands-aka, Hawaii-are also well worth the read.

Zen and the Art of Motorcycle Maintenance, Robert Pirsig. 1974. The author and his son ride by motorcycle to California; Profound Philosophical Ruminations ensue. Very 1970s.

Travels with Charley, John Steinbeck. 1962. The aging novelist, his black-poodle pooch and Rocinante, the customized van named after Don Quixote's horse, light out for the territories; Charley discovers redwoods, which depress him; Steinbeck discovers that you can't go home again.

The Electric Kool-Aid Acid Test, Tom Wolfe. 1968. Ken Kesey and the highly-acidic Merry Pranksters take the bus Further across the country to "tootle" its citizens out of lethargy. Neal Cassady rides again.

The African American Literature Book Club compiled a list of African-American children’s books with the aid of authors, power…