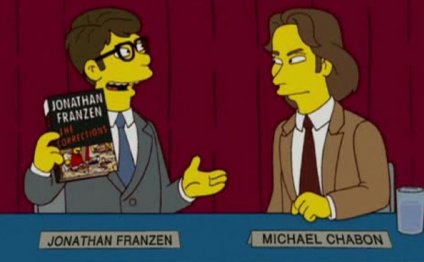 Jonathan Franzen is the slightly damaged child of Don DeLillo's peculiar relationship with American culture. DeLillo's Underworld has been the most influential American novel of the last 15 years. Underworld might fairly have been called The Connections. It seeks to represent the interconnectedness of American society by picturing it as a web threaded on strings of paranoia and power - a kind of Bleak House of the digital age. It combined an old-fashioned solidity and social realism with the prospect of the American writer as a cool cultural theorist, writing riffs and knowing essaylets about the power of the image in American society, about TV, crowds, garbage, the military-industrial complex and so on.

But there was a problem with DeLillo's example. His novel was a Dickensian novel without any humans in it. DeLillo insisted on connections (the atom bomb is somehow connected to JFK's assassination and to paranoia) as Dickens's plots insist on connections (wills, lost relatives, distant benefactors). But in Underworld there are no connections at the human level at all, because there are no human beings in the novel, no one who really matters and whose consciousness matters to himself.

Franzen realised something like this when he read Underworld, and pledged to put the matter right by producing, in his novel The Corrections, a book of DeLillo-like breadth and intellectual critique which was centred on human beings. He proposed, in effect, a softened DeLilloism. So The Corrections is itself a correction, and as such it succeeds marvellously. At its centre is the Lambert family, dominated by Alfred, the difficult patriarch, and Enid, the yearning and frustrated matriarch. Three grown-up children, Gary, Chip and Denise, labour to live adult lives under the long shadow cast by their unhappy parents. Around this tale of family life, Franzen deploys a lot of social life: we learn about a sinister biotech company in Philadelphia, a big midwestern railroad company, a liberal arts college in Connecticut and the pharmaceutical culture.

Franzen's emphasis on the human is welcome, and doubtless explains the novel's enormous popularity in America (where it has been a bestseller since it appeared in September). Franzen is a very intelligent, very appealing writer; so much so that an essentially dark book stays in the memory as warm and comic. To call it Tolstoyan seems exaggerated, however. The novelist Michael Cunning ham likens it to Buddenbrooks, but a comparison of those two novels shows The Corrections to be wide rather than deep, and smart rather than subtle. It has some of Mann's sweep and some of his gentle comedy (and even some of his Schopenhauer); but it lacks the luminous control of that great German book. Indeed, The Corrections suffers from a desire to put too much in. His novel is a kind of glass-bottomed boat through which one can glimpse most of the various currents of contemporary American fiction: domestic realism; postmodern cultural riffing; campus farce; "smart young man's irony" of the kind familiar in Rick Moody and David Foster Wallace; and, rather too often, an easy journalism of style.

But the book is frequently distinguished and challenging, and it was thus a surprise when Oprah Winfrey, not previously known for her taste in big postmodern novels, chose it for her televisual "book club". Franzen naturally accepted her invitation - such a decision commonly means royalties in the millions of dollars - and then complained to journalists that he felt he was being controlled and manipulated by Winfrey. Nervously, he explained that he felt that his book belonged to a "high art" literary tradition, while many of the Winfrey choices were sentimental and trashy. Winfrey then rescinded her invitation to feature Franzen on her show.

Franzen was soon being pummelled all over America for his "ingratitude". He had committed perhaps the worst American sin, elitism; and the second worst American sin, a lack of proper respect for the forces of commerce. He duly apologised for claiming his book as high art, and told newspapers that he and Winfrey were actually united in the great joint jihad of eliminating distinctions between high and low novels. The media beast, duly mollified, moved on to anthrax.

But one sympathised with Franzen's dilemma. Indeed, the sight of a novelist acting in this rebellious, stubborn, difficult, old-fashioned manner was cheering. Franzen was right to identify commercial forces such as Winfrey for what they are - forces that may actually be antithetical to literature, for all that they come dressed as literature's helpmeet. Winfrey's "book club", after all, has made a great contribution to American literacy, but has very little to do with American literature.

And one sympathised with Franzen's own literary status - anxiety; his novel may not be Tolstoy, but it does indeed belong to high literature. Franzen may himself be a little confused on this score. Five years ago, he wrote: "I resist the notion of literature as a noble calling because elitism doesn't sit well with my American nature, and because... my belief in manners would make it difficult for me to explain to my brother, who is a fan of Michael Crichton, that the work I'm doing is simply better than Crichton's." Eh? Franzen doesn't want to tell his brother that he is better than Crichton, for fear of offence; but he is sure he is better than Crichton anyway! Such is the modern, populist anxiety of a serious, talented, highbrow writer - an anxiety now made infinitely more acute by wild commercial success.

Audiobook: The Corrections by Jonathan Franzen