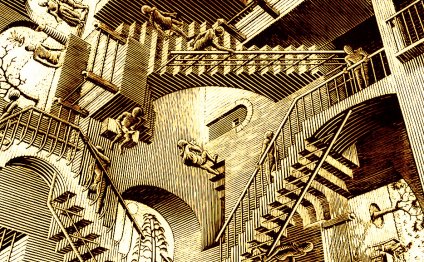 Defining the parameters of postmodern literature is a daunting task, due not only to disagreements about what texts can or can’t be approached as postmodern, but also to the paradoxical and elusive nature of the postmodern movement. Paradoxical seems to be an effective word to invoke when approaching postmodern literature–as Barry Lewis points out in his distillation of Linda Hutcheon’s views in his essay entitled “Postmodernism and Fiction, ” postmodern works simultaneously create and destabilize meaning and conventions in their ironic or critical use of works from the past (171). Given that the postmodern movement embraces instability and skepticism as its main traits, how do we even begin to grasp what literature can or can’t be approached as postmodern? In this post, I will briefly trace out the major components of postmodernity and postmodern literature using the 2011 edition of The Routledge Companion to Postmodernism (RCP)–and when appropriate, I will bring in original examples to illuminate some of the points made in the text.

Before addressing the issue of postmodern literature, it’s important to quickly overview elements, trends, and perspectives that can be approached as postmodern. In the introduction to the RCP, Stuart Sims points out that postmodernity is characterized by skepticism and rejection, particularly the rejection of cultural progress, and even more so, the implementation of universalizing theories or grand narratives (sometimes called metanarratives). I am reminded of a universalizing theory when recalling a conversation I once had with one of my literature professors, in which she claimed that all narratives are either about “sex or war.” A postmodern stance against my professor’s claim would argue for the inability of sex and war to constitute the totality of a particular narrative. The issue with grand narratives is that in their effort to generalize, they fail to account for experiences and beliefs that do not fit within their parameters or confines. To claim, for instance, that literature is the study of the ideas of “dead white men” would imply a failure to recognize other literatures produced by non-male and non-white authors.

In the TED-ED video entitled "What Makes a Hero, " Matthew Winkler discusses the elements and conventions that most stories on heroism embrace. Winkler identifies a blueprint that most epic tales share-thus developing a universalizing theory of the elements that shape heroism in fiction. While postmodernists do not deny the existence of universalizing theories, they are skeptical about them. Wherein lies the "danger" of approaching all epic tales through this metanarrative? Another question we can ask is: how do postmodern tales on heroism challenge or refute the hero's grand narrative?

Postmodernists not only reject grand narratives, but they also embody an “anti-authoritarian” position when approaching and analyzing the world and its cultural productions. In other words, postmodernists distrust any entity or agency that tries to control or regulate what people can or cannot do, and they also distrust any agent or element that tries to fixate the meaning that something possesses (or can ultimately possess). As Sims states in his introduction to postmodernism, “To move from the modern to the postmodern is to embrace scepticism about what our culture stands for and strives for” (vii). It might become clear at this point that the aims or stances of postmodernity and poststructuralist theories go hand-in-hand. As Sims puts it,

Poststructuralism has been an influential part of the cultural scene since the 1960s, but nowadays it can be seen to be part of a more general reaction to authoritarian ideologies and political systems that we define as postmodernism. (x)

Thus, it is unsurprising to observe that after the advent of postmodernity, ideas such as Barthe’s death of the author began to emerge in the study of literature and the arts; even theoretical fields such as queer theory arose after the advent of the postmodern movement. Both the death of the author and queer theory are anti-authoritarian in their outlook: the death of the author discredits the ability of an author to dictate what his/her work can or can’t mean to an interpreter, whereas queer theory is designed to assume a position against normativity to challenge binaristic thinking and the regulation of identities. Much more than being a genre or a typology, postmodernism can be approached as an attitude that is reactionary, especially towards the ideas and ideals perpetuated in the modernist movement (e.g. the divide between low and high culture, the view of humanity as an entity that is perpetually improving and progressing, among others). As Lloyd Spencer puts it in his discussion on “Postmodernism, Modernity and the Tradition of the Dissent, ” postmodernity’s anti-authoritarian alignment is the element that continues to give this attitude strength and relevance, even in the face of its critics:

One way of drawing the line between postmodernism and its critics is to focus on postmodernism’s refusal of the utopian, dream-like elements which have accompanied the constant change of modernity. Modernisms, including Marxism, dreamt of a better world. Legislating for this world on the basis of this dream of a better one is seen as the cardinal sin of that modernism which postmodernism seeks to go beyond. (220)

Returning to Barry Lewis’ essay on “Postmodernism and Fiction, ” he claims that postmodernism underwent an “epistemic break” during the 1990s, creating a distinction between what he calls first-wave postmodernism and second-wave postmodernism. During the first wave, postmodernism referred to “an overlapping set of characteristics that applied to a particular set of novelists, bound together by their simultaneous acceptance/rejection of earlier traditions of fiction” (169). First-wave postmodern texts not only challenged the divide between high-literature and low-literature that was fostered by modernists such as Virginia Woolf and T.S. Eliot, but they were also known for being “self-reflexive, playful and exceedingly aware of the medium of language in an attempt to revivify the novel form” (169). A good example of how this self-reflexive and playful nature manifests in a literary text can be seen in John Barth’s “Lost in the Funhouse.” In Barth’s short story, what at first seems to be a conventional coming-of-age story quickly metamorphoses into a critique on literary conventionality and ordinary structure. The text not only exposes how conventional plots work, but it actively highlights and questions its own structure, plot, and content.

Dime Novels: The Rise of the American Hero

The Best Quotes from the Popular Novel To Kill a Mockingbird