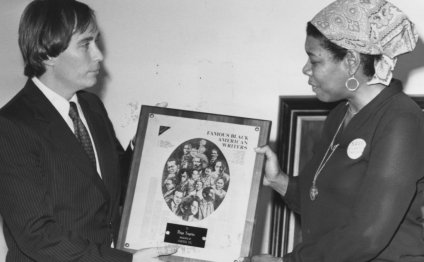 Reflections on African-American Authors of the 1940s
To commemorate Black History Month 2014, ArthurAshe.org built upon Arthur Ashe's introduction to the 1990 edition of by Carl Milton Hughes to explore the lives and works of famous African American authors from that period. In addition, other relevant and important persons were included, either in relation to current events or historic anniversaries .

Below is the full text of Ashe's introductory essayfor The Negro Novelist where he discusses the cultural and systemic challenges facing black writers and the importance of their contributions.

Alongside his writing are the direct links to the individual profiles:

"In his critique and review of prominent African-American novelists and essayists, Carl Milton Hughes centers on a unique decade. Before 1940 the pens of many black writers were focused on several common themes: the difficulties inherent in the great migration from the segregationist South to the more promising northern cities; the literary legacy left by the ideas of the Harlem Renaissance covey of authors; and the particularized effects of the Great Depression on black America and race relations.

After 1950 these same writers and their newer colleagues turned angrier as World War II raised expectations, hopes, and horizons. Unquestionably the black writers of the decade 1940-1950 helped frame the emotional and spiritual mindset for the legal gains of the 1950s. In retrospect, it seems almost inevitable that Chief Justice Earl Warren’s Supreme Court would hand down the Brown v. Board of Education decision in 1954 partially because of the fictionalized moral arguments proffered by the novelists in this book.

It was never easy or comfortable for black critics of American foreign or domestic policies and customs to be objective and secure. The Negro literati and intelligentsia had flirted with Communism in the 1930s. Some like Paul Robeson actually moved to the Soviet Union for a time, not so much because of a primal love for Communism or the Soviets but rather because racism seemed so intractable stateside. Entire subject areas, geographical regions, colleges and universities, public accommodations, et al. were simply off-limits to blacks, and there seemed little hope that change for the better was imminent.

One subject area that experienced constant change and examination was the very nomenclature of ethnic self-definition. In the white press of the 1940s and earlier, the word “negro” was spelled with the n in lower case. Southern papers, of course, did so intentionally as a sign of white racial superiority. Others did so because negro was not considered a proper noun. In textbooks or anthropological works the appellation “Negroid”—referring to a particular or distinct race of people—was spelled with the upper case n.

This exercise was not done for semantics’ sake alone. The arguments had to do with the etymology of how whites—or Caucasians—labelled their darker brethren. Concurrent with the new sense of liberation felt just after World War II, Negroes wanted to—even insisted on—being able to define themselves instead of accepting whatever name—or label—was given to them by whites. There could be little meaningful political liberation without true cultural liberation. This cultural metamorphosis began with self-definition. At the beginning of the Depression in 1931, George Schuyler had written Black No More in which he railed against equivocating Negro leadership, and satirized America’s fear of yellow, black and brown peoples. The Black in his title was intentional and more biting than Negro would have been.