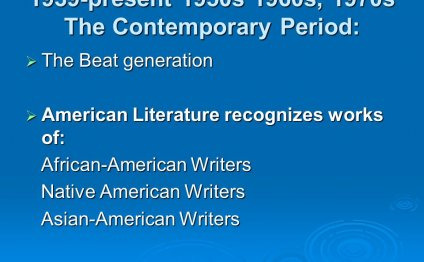 (The following article is taken from the U.S. Department of State publication, Outline of American Literature.)

The United States is one of the most diverse nations in the world. Its dynamic population of about 300 million boasts more than 30 million foreign-born individuals who speak numerous languages and dialects. Some one million new immigrants arrive each year, many from Asia and Latin America.

Literature in the United States today is likewise dazzlingly diverse, exciting, and evolving. New voices have arisen from many quarters, challenging old ideas and adapting literary traditions to suit changing conditions of the national life. Social and economic advances have enabled previously underrepresented groups to express themselves more fully, while technological innovations have created a fast-moving public forum. Reading clubs proliferate, and book fairs, literary festivals, and "poetry slams" (events where youthful poets compete in performing their poetry) attract enthusiastic audiences. Selection of a new work for a book club can launch an unknown writer into the limelight overnight.

On a typical Sunday the list of best-selling books in the New York Times Book Review testifies to the extraordinary diversity of the current American literary scene. In January, 2006, for example, the list of paperback best-sellers included "genre" fiction – steamy romances by Nora Roberts, a new thriller by John Grisham, murder mysteries – alongside nonfiction science books by the anthropologist Jared Diamond, popular sociology by The New Yorker magazine writer Malcolm Gladwell, and accounts of drug rehabilitation and crime. In the last category was a reprint of Truman Capote's groundbreaking In Cold Blood, a 1965 "nonfiction novel" that blurs the distinction between high literature and journalism and had recently been made into a film.

Books by non-American authors and books on international themes were also prominent on the list. Afghan-American Khaled Hosseini's searing novel, The Kite Runner, tells of childhood friends in Kabul separated by the rule of the Taliban, while Azar Nafisi's memoir, Reading Lolita in Teheran, poignantly recalls teaching great works of Western literature to young women in Iran. A third novel, Arthur Golden's Memoirs of a Geisha (made into a movie), recounts a Japanese woman's life during World War II.

In addition, the best-seller list reveals the popularity of religious themes. According to Publishers Weekly, 2001 was the first year that Christian-themed books topped the sales lists in both fiction and nonfiction. Among the hardcover best-sellers of that exemplary Sunday in 2006, we find Dan Brown's novel The DaVinci Code and Anne Rice's tale Christ the Lord: Out of Egypt.

In the Women's Literature section of bookstores one finds works by a "Third Wave" of feminists, a movement that usually refers to young women in their 20s and 30s who have grown up in an era of widely accepted social equality in the United States. Third Wave feminists feel sufficiently empowered to emphasize the individuality of choices women make. Often associated in the popular mind with a return to tradition and child-rearing, lipstick, and "feminine" styles, these young women have reclaimed the word "girl" – some decline to call themselves feminist. What is often called "chick lit" is a flourishing offshoot. Bridget Jones's Diary by the British writer Helen Fielding and Candace Bushnell's Sex and the City featuring urban single women with romance in mind have spawned a popular genre among young women.

Nonfiction writers also examine the phenomenon of post-feminism. The Mommy Myth (2004) by Susan Douglas and Meredith Michaels analyzes the role of the media in the "mommy wars, " while Jennifer Baumgardner and Amy Richards' lively ManifestA: Young Women, Feminism, and the Future (2000) discusses women's activism in the age of the Internet. Caitlin Flanagan, a magazine writer who calls herself an "anti-feminist, " explores conflicts between domestic life and professional life for women. Her 2004 essay in The Atlantic, "How Serfdom Saved the Women's Movement, " an account of how professional women depend on immigrant women of a lower class for their childcare, triggered an enormous debate.

It is clear that American literature at the turn of the 21st century has become democratic and heterogeneous. Regionalism has flowered, and international, or "global, " writers refract U.S. culture through foreign perspectives. Multiethnic writing continues to mine rich veins, and as each ethnic literature matures, it creates its own traditions. Creative nonfiction and memoir have flourished. The short story genre has gained luster, and the "short" short story has taken root. A new generation of playwrights continues the American tradition of exploring current social issues on stage. There is not space here in this brief survey to do justice to the glittering diversity of American literature today. Instead, one must consider general developments and representative figures.

"Postmodernism" suggests fragmentation: collage, hybridity, and the use of various voices, scenes, and identities. Postmodern authors question external structures, whether political, philosophical, or artistic. They tend to distrust the master-narratives of modernist thought, which they see as politically suspect. Instead, they mine popular culture genres, especially science fiction, spy, and detective stories, becoming, in effect, archaeologists of pop culture.

Many writers hunger for open, less canonical genres as vehicles for their postmodern visions. The rise of global, multiethnic, and women's literature – works in which writers reflect on experiences shaped by culture, color, and gender – has endowed autobiography and memoir with special allure. While the boundaries of the terms are debated, a memoir is typically shorter or more limited in scope, while an autobiography makes some attempt at a comprehensive overview of the writer's life.

Postmodern fragmentation has rendered problematic for many writers the idea of a finished self that can be articulated successfully in one sweep. Many turn to the memoir in their struggles to ground an authentic self. What constitutes authenticity, and to what extent the writer is allowed to embroider upon his or her memories of experience in works of nonfiction, are hotly contested subjects of writers' conferences.

which science degree is easiest how many solutions are there to this nonlinear system who up start why solutions are important how many device can use spotify premium how to roadmap a project what management information system where are entrepreneurs located what system is the liver in how teaching happens startup capital in startup who ends up with who where was a teacher filmed 2020 what product is good for hair growth who design the statue of liberty how project phone to tv how much manager in axie how often does advantage solutions pay where to purchase road map when design thinking started which device performs the function of determining how long teaching degree why science is important for students when set up synonym how many entrepreneur are there where to start business from home who solution for diarrhea how much technology should be used in the classroom where business administration can work what startup selection should i use how much teaching english in thailand how many startup fails in india who system framework how science is unlocking the secrets of addiction where to donate technology when london snow falls startup who is vera why device is not playing for nip when design works who developed the let s move initiative the man company best products how long system restore windows 10 when technology pushes the boundaries of art what technology does verizon use how many project managers are there in the us
Source: iipdigital.usembassy.gov

Poems on Various Subjects, Religious and Moral, is a collection of poetry by Phillis Wheatley, the first African American…